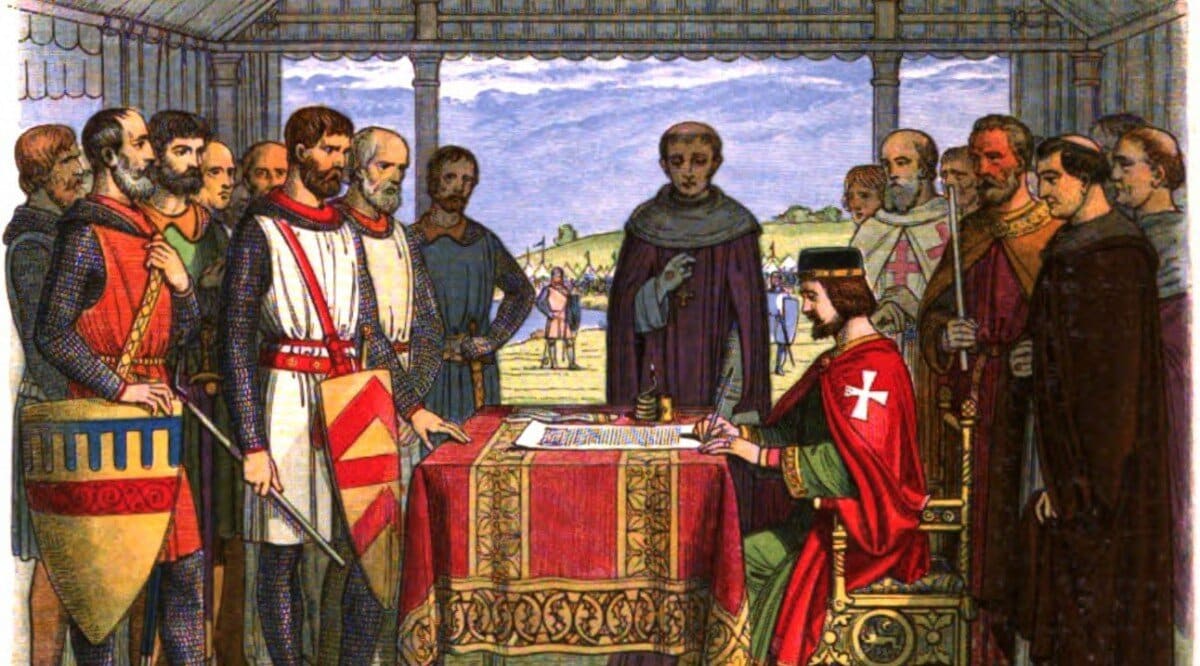 In the summer of 1215, King John met with a group of barons by the River Thames in Runnymede. The last few years had been a whirlwind. Unhappy with the nation’s direction, a group of barons rebelled. This led to the signing of the Magna Carta, also known as the Great Charter. While its impact at the time wasn’t significant, it’s now known as one of the most important documents ever written. Why should we care about it today? Here are ten reasons:

#1: It established that no one – not even a king – is above the law

Before the Magna Carta’s signing, there was a constant discussion about kings and the law related to each other. Many believed that the king was the law. He wasn’t bound to the same rules as everyone else. Others said that the king’s responsibility was to discover the law, but that he wasn’t above it and needed to follow it the same as his subjects. The Magna Carta established the rule of law and forbade the king from doing whatever he wanted.

#2: It established that no one can be arrested or exiled without reason

The Magna Carta also established due process. One of the clauses reads that no one can be detained without cause or evidence. It states that “no free man” can be arrested, imprisoned, disseised (which means having your property seized), outlawed, or exiled without the “lawful judgment” of peers or the law of the land. King John was known for taking whatever he wanted, so this clause specifically targeted that action.

#3: It established that everyone has a right to trial by jury

#4: It hinted at early women’s rights

Clause 8 of the Magna Carta reads: “No widow shall be compelled to marry, so long as she prefers to live without a husband.” The clause continues to say that if she does want to remarry, she’s not allowed to marry whoever she wants. Having the king or a baron step in was supposed to protect a woman from coercion. By allowing a woman to stay single after her husband died, the Magna Carta also protected her right to financial protection.

#5: It brushed up against freedom of religion

When the Magna Carta was signed, the rights of the church of England were a top priority. There was a lot of tension between the king and the Pope. The first clause of the Magna Carta establishes the freedom of the church for all time. This protected the power of the church, but the meaning has been reinterpreted. It appeals to the idea of religious freedom, as well as the separation of church and state.

#6: It’s a prime example of how documents and their meanings evolve

When King John’s barons wrote the Magna Carta, they had no idea how the documents would be read in the future. There are 63 clauses, but we only discuss three. If people back in 1215 learned what the Magna Carta inspired, they would no doubt be shocked and perhaps even appalled. This is an example of how humans mythologize certain events and project modern meanings on old documents. While most of the Magna Carta is completely irrelevant today, its essence has stood the test of time.

What is the enduring essence of the Magna Carta? It’s a symbol of holding power accountable. When the Magna Carta was signed, no one had high hopes for it. King John only signed it to stall for time, so as soon as the barons demanded he hold up his end of the bargain, he got the Pope to annul the document. It wasn’t until 1225 when Henry III was king that a newer version of the Charter came out. After that, it was used to try to rein in the powerful kings during the Stuart period and English Civil War.

#8: It tells the story of people taking action

Even though the Magna Carta wasn’t respected right after it was signed, the story of the barons forcing the king’s signature is iconic. Up until that point, kings had negotiated with barons, but everything they signed into law was their own choice. The Magna Carta was the first time that barons took an active role and forced the king to hear their demands. It’s no surprise that John refused to follow through, but the story is still inspiring.

#9: It planted the seed of democracy

Experts see the Magna Carta as one of the first steps toward the parliamentary democracy that England has today. Principles like the rule of law and due process are essential to democracy. The Magna Carta inspired everything from the Bill of Rights in 1689 to the Bill of Rights in the US in 1791. It began the shift of power away from an all-powerful king to a more democratic structure.

#10: It paved the way for human rights

The barons forced King John to sign the Magna Carta because they believed he’d crossed a line. John’s actions, like heavy taxation and corruption, would now be human rights violations. By establishing the rule of law, the Magna Carta said that there are certain things not even a king can get away with. The rule of law and due process are now included in documents like the Universal Declaration of Human Rights and England’s Human Rights Act of 1998. Interested in learning more about human rights? Consider studying a master’s degree.