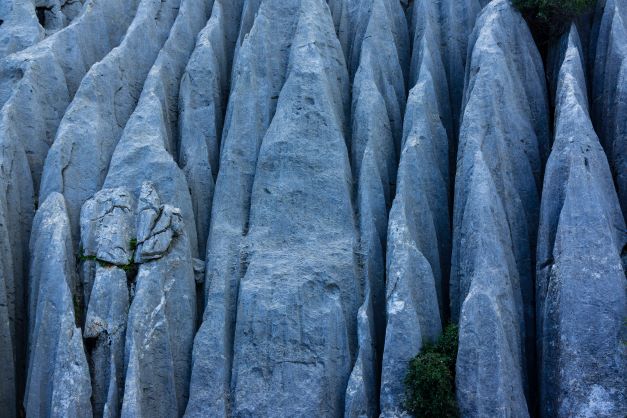 Generally speaking, weathering refers to a phenomenon in which rocks or minerals are broken down or dissolved on the Earth’s surface. Chemical weathering, in particular, is defined as the process during which water, air, and microorganisms change the molecular structure of rocks and soil. There are several types of chemical weathering processes, including acidification, hydrolysis, hydration, oxidation, and carbonation. Each of these processes changes the structure, shape, and composition of minerals in a unique way.

#1. Chemical Weathering Breaks Down Rocks and Minerals, Promoting the Formation of Soil

Acidification is a process in chemical weathering that dissolves rocks and breaks down the soil. Therefore, it is often referred to as dissolution. Whenever minerals are exposed to acids (from acid rain, microorganisms, or human activities), chemical reactions occur. As the chemical makeup of rocks or soil is broken down, these minerals are dissolved. Some of the acid examples that cause chemical weathering include carbonic acid, sulfurous acid, sulfuric acid, and nitric acid.

#3. Hydrolysis Can Dissolve or Convert Rocks and Soil into New Materials

#4. Hydration Modifies the Chemical Structure of Rocks and Soil

Hydration is a chemical reaction in which water is combined with different substances. As it leads to the formation of new compounds, hydration in chemical weathering modifies the chemical structures of minerals. For example, groundwater reacts with calcium sulfate (mineral anhydrite) and produces calcium sulfate dihydrate (gypsum). As gypsum is one of the most common minerals that is widely mined and utilized as a fertilizer and building plaster, chemical weathering, and hydration, in particular, are pretty much essential.

In chemistry, oxidation is defined as a chemical reaction during which a substance reacts with an oxidizing agent and loses one or more electrons. When it comes to chemical weathering, the oxidizing agent is typically oxygen in the air. When minerals with high iron or magnesium content are exposed to air, they gradually oxidize, which also explains rust formation. As a result, chemical weathering produces new minerals, such as limonite or hematite. A great example of oxidative chemical weathering is a nearly 3-billion-year-old banded iron-formation (BIF) from Canada.

Carbonation is yet another chemical reaction that facilitates chemical weathering. In carbonation, carbon dioxide reacts with different substances to produce carbonic acid. Although carbonic acid is a weak acid harmless to plants and living organisms, it can react with and dissolve some kinds of minerals, such as limestone (calcium carbonate). When carbonic acid reacts with calcium carbonate, calcium bicarbonate is formed, which is characterized by an increased solubility in water.

As buildings, statues, monuments, and ornamental stonework feature various minerals, they can also be affected by chemical weathering. When exposed to different atmospheric and weather elements, these structures can deteriorate over time. While it is impossible to prevent this from happening, understanding how chemical weathering works and identifying the substances involved in the process allows professionals to protect historical buildings and structures.

#9. Chemical Weathering Is Important for the Formation of Landforms

As mentioned above, chemical weathering involves a myriad of chemical reactions. Therefore, the process facilitates the production of numerous natural resources from minerals. Some of the most abundant examples of the byproducts of chemical weathering are clay minerals, oxide minerals (quarts), and soluble salts (serpentine and chlorite).