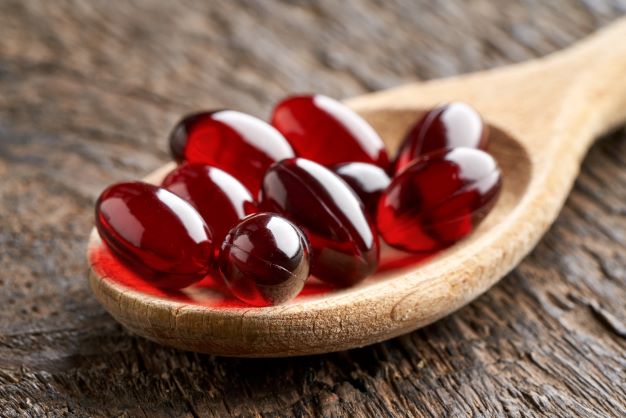 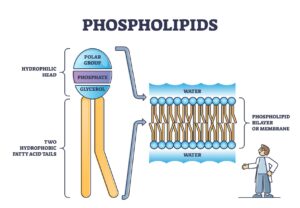 #1. Phospholipids Have a Hydrophilic Head and Hydrophobic Tails

There are three types of lipid molecules found in membranes. These are phospholipids, glycolipids, and cholesterol. While all three classes of membrane lipids are of huge importance, phospholipids are considered to be the major components of a membrane. In a biological membrane, there are typically two layers of phospholipids, called the phospholipid bilayer. This is a thin polar membrane with a hydrophobic interior and hydrophilic exterior. Without phospholipids, our cells would not have membranes that provide the passage of molecules and ions into or out of the cell.

Non-alcoholic fatty liver disease (NAFLD) is a term denoting a broad range of conditions caused by the accumulation of fat in the liver. While an early stage of fatty liver disease is not really harmful, it can lead to severe health issues, including cirrhosis. As phospholipids have antioxidant, anti-inflammatory, and apoptosis modulating effects, essential phospholipids rich in phosphatidylcholine are widely used for treating the disease.

Phospholipids, especially phosphatidylcholine (PC), are known for improving metabolic health. PC increases the concentration of acetylcholine, a critical neurotransmitter, which plays an important role in metabolism. In addition, phosphatidylserine (PS) is another phospholipid that is involved in the regulation of lipids and lipoproteins while supporting the energy metabolism in our body. Therefore, low levels of PC and PS often lead to metabolic disorders, such as obesity or insulin resistance.

Phospholipids are involved in multiple cellular processes, such as forming the permeability barrier of the cell membrane, participating in signal transduction, and acting as precursors for the synthesis of various macro and signaling molecules. For instance, phosphatidylethanolamine (PE) is a multifunctional phospholipid that is crucial for mitochondrial functionality and mammalian development. Besides, PE is the second most prevalent phospholipid in humans that can be converted to phosphatidylcholine (PC) when needed.

Phosphatidylinositol (PI) is yet another essential phospholipid that is involved in various biological functions. For example, PI along with polyphosphoinositides acts as a ligand and binds to protein targets. By binding to proteins via lipid-binding domains, PI and polyphosphoinositides manage to alter the location and enzymatic activities of the target protein molecules. Besides, phosphoinositides act as second messengers in multiple cell-signaling pathways and other biological processes occurring in our bodies.

#8. Phospholipids Cover and Protect Brain Cells while Carrying Messages between Them

According to the review article on Frontiers, the brain has the second highest lipid and lipid intermediate content after adipose tissue. In terms of phospholipid content, the brain is one of the richest tissues. While phospholipids are essential in general, they are absolutely crucial for maintaining healthy brain cell membranes and neurotransmitters. Along with providing structural integrity for cell surface and intracellular membrane proteins, phospholipids carry messages between brain cells.

#9. Phospholipids Regulate the Permeability of the Membrane

Along with ensuring that numerous cellular processes occur in subcellular compartments successfully, phospholipids protect the cells. As a matter of fact, the function and structural integrity of cells depend on membranes. While the phospholipid bilayer separates the interior of the cell from the environment, it also protects the cell from various types of insults. This is done by creating barriers in cellular membranes to protect the cells.